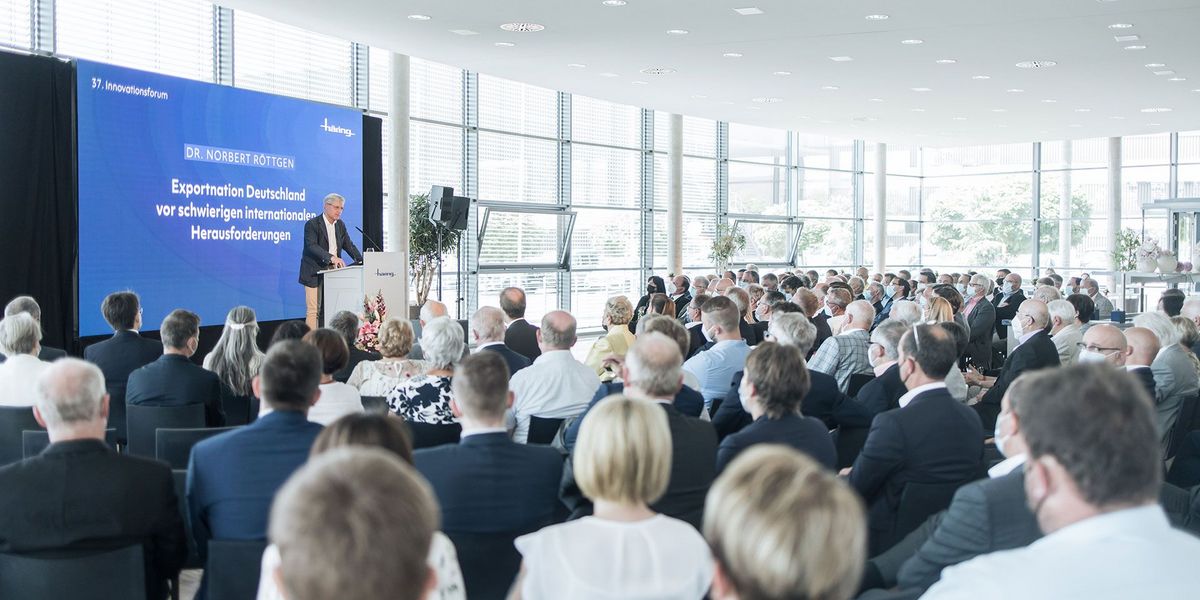 International challenges for Germany as an export nation

Around 140 listeners, including former Minister President Erwin Teufel, several mayors, politicians, entrepreneurs and representatives from the business community accepted the invitation to this year's Innovation Forum in the ANTONIS company restaurant. The topic met with great interest, because for the internationally positioned SMEs, which are particularly well represented in the Heuberg region and in the Swabian Alb, good relations with other countries are of great importance in everyday life. This encompasses far more than the classic export of goods, including the strained relationship with China, as well as skilled workers who do not fall from the "Heuberg sky". "Only with good foreign policy relations can we also achieve good things," Managing Director Miriam Häring opened the evening, handing over the floor to CDU Bundestag candidate Maria-Lena Weiss. In addition to words of praise for the handling of the Corona crisis, the Bundestag candidate took a clear stand for a new start into a decade in which climate protection has priority - under the premise that economy and ecology work together. This is an aspect that Miriam Häring had also previously raised as a future challenge: "Here we are pursuing the same goals as Dr. Röttgen: namely to be able to drive sustainable development forward with education, innovation and digitization."

This gave Dr. Röttgen the floor, who opened his speech strikingly: "We won't solve any problems with stupid nationalism." The Chairman of the Foreign Affairs Committee in the Bundestag impressed the audience with a global analysis, reported on his recent visit to the USA and took a stand on the difficult relations with China, where he warned against falling back into old ways - and, with the approval of Managing Director Dr.-Ing. Jürgen Häring, emphasized the importance of economic ties. With subsidiaries in China and the USA, Anton Häring KG, like many internationally successful medium-sized companies, benefits from a functioning foreign policy with the two power blocs.

Röttgen sees the key to success here in consistent innovative strength in the technology sector, which should be further strengthened. He was cautiously optimistic about the future task of "zero emissions", saying that he was certain that it was no longer a question of "whether", but only a question of "how".

A lively exchange with the guests once again made the 37th Innovation Forum a top-class event with just as much input from Röttgen. At the reception that followed, one visitor remarked: "I think we've had the future foreign minister visiting us today.